Video poker is heavily influenced by the card game draw poker. It’s played against the house and features many exciting elements like wild cards, bonus pay-outs, and gamble options.

The aim of the game is to create the best possible hand out of the cards you’re dealt. While there are numerous video poker variations available in online casinos, most follow traditional poker hand hierarchy rules. Below, you can find our guide to the universal poker hand rank hierarchy. 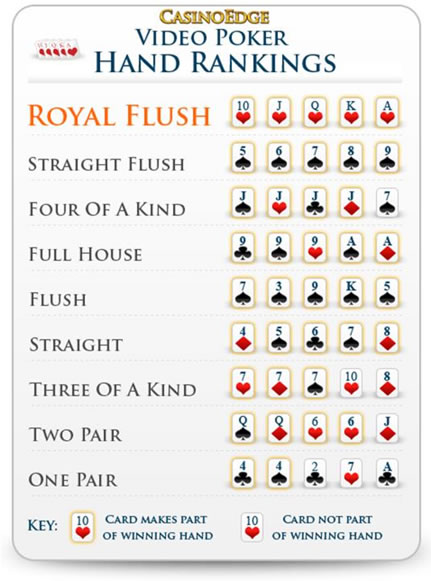 After buying credits (one for one unless multi-handed; the dollar-to-credit ratio increases in favour of the dollar), the player chooses how many of those credits to bet and is then dealt five cards. From these first five cards the player must choose which to keep and which to discard for replacements from the deck. Re-deals will create a new hand or, in the case of multi-hand versions, a number of new hands in the hope of improving the original hand.

Many of the variations contain ‘wild cards’, which are usually (but not always) twos. The wild card acts as a blank slate that will become the card most likely to give the player the biggest win after the final draw. The machine will choose the card for the player and automatically award the highest pay-out possible.

One of the best features of video poker is the ability to play multi-handed. As with the standard game, in multi-handed video poker the player receives five cards with the option to discard any of them and draw for replacements. The difference is that, after selecting the cards to be redrawn, the original cards are duplicated as many times as the variation states. The cards are then drawn to each of the duplicates using a new deck for each one.

Example: Playing a 50 hand variation, the player is dealt ace, king, ten, ten, ace, and holds both of the aces and the tens, discarding the king. The four cards that the player has kept will be duplicated over 50 hands so that the player is holding 50 hands of the exact same cards.

Then each of the 50 hands will have their own individual draws from fresh decks and be subjected to the same hand rank hierarchy to determine the pay-out.

Video poker often features a gamble or double up feature to multiply pay-outs. Once a game has been completed, you’re either asked if you want to gamble/double or there is a gamble/double button that you can click. If you choose this option, you’re presented with a choice between red and black (which will pay double if correct) or a choice of the four suits (which will pay 4x if you are right). However, a missed guess means you lose your winnings. There are also slight variations of this theme, which includes a simple game of high or low. The variation of this gamble feature depends on which online casino you are playing at and the software that powers that casino.