Casino Hold’Em is a house game designed to be dealt by a croupier for casino patrons to play in the main casino. Players play against the house and not against other players in this variant. Subject to the dealer qualifying, it is a straight contest between the dealer’s hand and the player’s, player may also get paid an Ante Bonus on his Ante bet. Player can also place an AA Bonus side bet which is based on the poker value of his two personal cards and the first 3 flop cards. 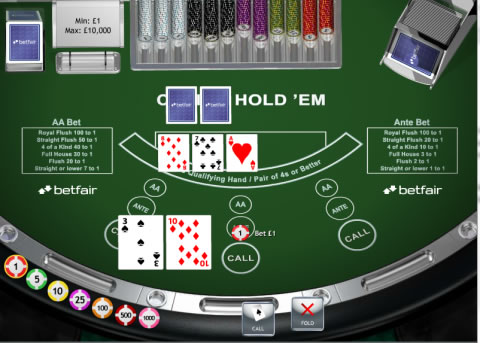 There is no easy way to quantify optimal strategy for this game since the optimal decision for each hand is based on the combination of all 7 cards (two personal cards and five board cards) dealt. As such, while computer programs can easily deal with the calculations required to make the correct play in any particular hand, it is difficult to make a set of general rules which can be memorized such as exists for Blackjack. The optimal strategy player will raise 82% of the time. So only in the worst 18% of hands should the player fold. These are broadly when the player has two singletons in the hole that are low compared to the flop, with little or no chance for a straight or flush.

The house edge of Casino Hold’Em excluding the side bet (that is, the percentage of each bet the casino will on average win, assuming perfect play on the part of the player) varies depending on the specific rules in the casino but is the most common pay tables result in a house edge varying from just below 2% to around 2.5%. Using the ante pay table above, the house edge is 2.16%.