Equally well known as Twenty-One. The rules are simple, the play is thrilling, and there is opportunity for high strategy. In fact, for the expert player who mathematically plays a perfect game and is able to count cards, the odds are sometimes in that player’s favour to win.

But even for the casual participant who plays a reasonably good game, the casino odds are less, making Blackjack one of the most attractive casino games for the player. While the popularity of Blackjack dates from World War I, its roots go back to the 1760s in France, where it is called Vingt-et-Un (French for 21). Today, Blackjack is the one card game that can be found in every American gambling casino. As a popular home game, it is played with slightly different rules. In the casino version, the house is the dealer. In casino play, the dealer remains standing, and the players are seated. The dealer is in charge of running all aspects of the game, from shuffling and dealing the cards to handling all bets. In the home game, all of the players have the opportunity to be the dealer.

Here are the full rules of the game.

When each player’s bet is settled, the dealer gathers in that player’s cards and places them face up at the side against a clear plastic L-shaped shield. The dealer continues to deal from the shoe until he comes to the plastic insert card, which indicates that it is time to reshuffle. Once that round of play is over, the dealer shuffles all the cards, prepares them for the cut, places the cards in the shoe, and the game continues. 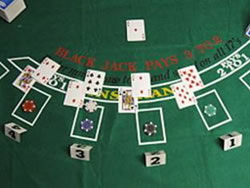